During NaNoWriMo, the traditional goal is to write fifty thousand words in thirty days. It’s supposed to be a novel that you start from scratch on day one. I accepted that challenge in 2011 and finished the first draft of my first novel Once in Love with Lily. This year, I began on November 1st with a unique goal. Instead of writing fifty thousand words of a completely new novel, my goal was to complete a workable, readable draft of the sequel to Once in Love with Lilly. I had already written several drafts and I was still waffling on content. So, I had decided to start from scratch one more time and knock it out in thirty days. I kept up with my daily word count and for the first three days, and I was feeling quite pleased with myself until…. I committed the number one NaNoWriMo sin. I re-read what I had written!

Every one knows that if you’re trying to knock out a novel in a month, you don’t have time to read and edit, but in this case, I’m very glad I did. As I looked at my “fresh start” with fresh eyes, I came to a huge realization. My hero was distinctly unlikable. I had become so concerned with creating the hook that agents keep talking about, that I had destroyed one of the beloved characters that had hooked my readers in the first place.

Somewhere along the way, I forgot who I was. I tried to become a plotter who focused on structure and eight point story arcs, when I’m anything but. I have always claimed to write from the heart first and the head second, to be more concerned with meaningful relationships, quality drama, and realistic dialog. I’ve generally found that if you tell a good story, proper structure will naturally evolve.  Ever a victim of self-doubt, I had allowed my own insecurities about my lack of formal training in the craft to cloud my judgment.

Once I had that aha moment, I went back to my original plan for the story and began cut, copy, and paste together all the usable pieces from the subsequent drafts. What I now have is about forty thousand words of a story that still needs a lot of detail, a ton of editing, and a fair amount of restructuring before it’s ready for public consumption. Still, I’m comforted by the fact that it is a much truer version of Lily’s and Tony’s story.

This week I hope to complete several new chapters that will begin to fill in some of the holes in the original plot and find ways to weave some subtle humor into the somewhat serious plot. I’ll keep you posted!

If you are interested in reading the original, Once in Love with Lily is on sale for.99 cents at the Amazon Kindle Store now through November 15th. Click here to view the book trailer. 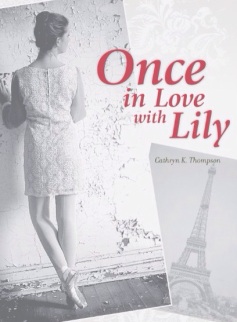